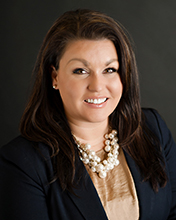 She is a veteran of the United States Navy where she was a journalist with work including Northern Atlantic Treaty Organization (NATO) and global assignments to Sicily and Czech Republic.

Originally from Phoenix, Arizona where she studied communications at Arizona State University, she now resides in Chesapeake, Virginia with her husband and two children.