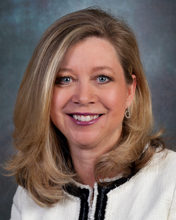 Lisa Stewart, CLU®, CLF®, is the Senior Vice President for the Eastern Market Area. In this role, she has leadership responsibility for agency field leadership teams supporting over 3,100 agents across 12 states in the Eastern part of the country.

Lisa joined State Farm In 1991 as an Auto Operations Assistant in Duluth, Georgia. She later became a licensed team member for a State Farm agent while completing her college education. In 1996, she returned to the Atlanta Operations Center and held various roles in claims and agency before becoming a State Farm agent in Albany, GA in 2001.

Lisa is a graduate of Georgia State University and earned her Executive Master of Business Administration from the University of Notre Dame. She has also earned the Chartered Life Underwriter® (CLU®) and Chartered Leadership Fellow® (CLF®) through The American College.

Lisa and her husband, Brian, have two sons: Lane and Evan.